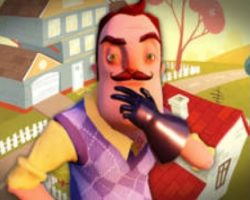 There is a new release of Hello Neighbor Hide and Seek ready to launch, with an even higher level of challenge and fun! It’s amazing to watch how the Neighbor’s house grows in every new version, from a basic layout mimicking a regular suburb home to a huge backyard with a rollercoaster. This time you’ll see even more bizarre things in his manor! Just like in previous installments, you’ll have to wander around the area looking for clues that will help you unravel the Neighbor’s mystery and avoiding the owner of the house who is unaware of your presence… yet. He’ll be on to you, though, and if you give away the fact of your intrusion, he won’t just sit still and let you snoop around. Prepare for cunning traps and security measures that will appear in the places where you’ve been spotted. Pick your step carefully and distract your opponent by throwing items, turning on the lights and household appliances and doing other things that will give you a chance to escape the grim fate. And don’t get into the Neighbor’s hands if you don’t want to end up in his basements together with other victims!

Another upcoming surprise is the release of the Hide and Seek mode where you’ll have to play with your little brother collecting toy animals throughout the house while avoiding being discovered. The playground has become much larger than in previous versions and there are now less opportunities of finding a shelter when you are about to be spotted, so you’ll have to move and think quickly. Animals aren’t easy to obtain either. To do that, you’ll have to figure out a way of getting to spots that are tough to reach and using the items scattered nearby. Two of the things you’ll need most often are the binoculars that will help you survey the location from afar and the basket ball that will distract your brother if he comes any close. The new releases are nearly here, we just have to wait a couple of more weeks! Keep track of the news and trailers to find out what else to expect!