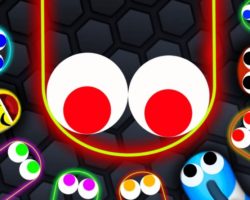 Become the biggest snake in the pool and smash your rivals in Slither.io! You are about to start out as a tiny worm, but by crawling around the map and picking up glowing dots you can add size at a tremendous speed ultimately outgrowing your opponents. Stay alert, others are out to get nutritious shiny globes as well! The most fascinating part, however, is to clash with hostile worms trying to make them hit your body with their heads. When that happens, the defeated worm will explode in a multitude of colorful bits and you’ll be able to feed on them to gain an even more impressive length and width! The game lasts as long as you manage to stay alive. While the concept seems simple at first, surviving in Slither.io implies a lot of tactical thinking! Care to dare?