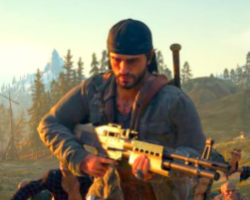 There are thousands of horror titles, where you have to survive in a furious fight with zombies. And again, you are in the middle of zombie apocalypse, in the game Days Gone. However, there is something here that distinguishes this title from all the other ones that feature the same plot and gameplay elements. This story has more deep ideas than all traditional zombie titles, where there is nothing to philosophize about – you just kill or get killed. On the contrary, Days Gone approach a familiar plot differently. Here, not only you will meet the undead, the zombies as monsters, but also you will see people, who are no less monstrous than the undead. The title asks the questions about the difference between people, who act like monsters and real monsters. Indeed, apocalypse is a great material for a dramatic plot, because these desperate conditions make people behave in a very different way.

The main character is a person, who has nothing to lose. When the apocalypse started, his injured wife and child were taken away by a rescue helicopter, but he decided to stay for the sake of his friend. He realized that his best buddy won’t handle the catastrophe on his own, so now he is in the forest fighting with zombies for the sake of other people’s life. Maybe, this lonely hero will manage to keep the monsters away from other people? If you can help him to do so, then he has all chances. Join Days Gone right now, because we have already uploaded it on our site.