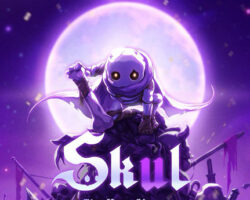 Play for Skul – an alive skeleton on his way to becoming a hero. The pre-history sounds like this. There were two kingdoms – demons and people. The war between them lasted for years and nobody could win this struggle. However, one day, people managed to gather all of their powers and attacked the demons’ kingdom all of a sudden. This was a bloody fight and all the beasts were defeated. The survived ones were taken away by humans. Skul is the last demon, who is here to take a revenge and get the demons back to freedom.