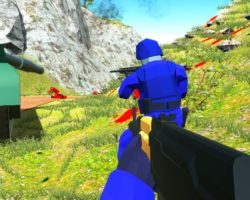 Try a stunning first person shooter that allows you to enter into combats with thousands of players and enjoy beautiful realistic graphics! Unite with either the team of Blue or the team of Red and join forces with your comrades to win the battle. There are plenty of weapons to choose from and a scattering of war transport to make your way around the map. You can use the tank or soar over the battlefield in a helicopter. The best friend of a soldier is of course the sniper’s rifle, but it requires skill and good reflexes to use it. Danger waits for you around every corner and you will constantly be under attack. You are going to apply great efforts to survive. Who knows, maybe this very shot will be decisive in an ongoing match! The game runs on until the checkpoint is captured or until all members of either team are defeated. Besides, Ravenfield features several modes and a campaign. The game is currently being developed with betas regularly launched for players to check out the most prominent features of the gameplay early on. Stay tuned for any updates!