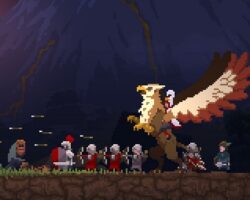 Big game – big difficulties. Kingdom Two Crowns is a survival and strategy game for the PC platform. The environment in the game is related to the fantasy style. It features a Shogun story campaign inspired by the aesthetics and realities of feudal Japan. Our king is able to spend the day building fortifications, collecting troops and resources, and exploring his lands. And at night he will have to fight with Greed, which sends hordes of monsters to besiege the kingdom. You will have access to such game modes as “co-op” and “for one player”.