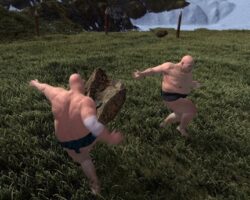 Paunch is a fight for two players in an arena where you can hurl rocks too. The duel with the opponent will start with twelve rocks (thirteen as update). The rocks can be used as a weapon and as life renewers for players. On the start 2 rocks will be used as a life for member, the left ten rocks will be at your disposal plus an empty boulder. The fighters can take and use only two rocks at a time. If the rock hits the opponent, it will kill him. However there are rocks of him to respawn. They also will glow red with later explosion when the opponent appears. The empty boulder is white color and can kill the fighter so you will automatically win.

Night of the Consumers