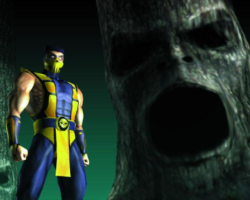 The horrible god of darkness Shinnok has returned to the world. Along with his army, a furious evil god has defeated Shao Khan and invaded and the Kingdom of Earth. Now he is capturing the worlds one by one, setting them into chaos. Finally, he reaches the Heaven, where ancient Gods live. But the best warriors from Earth are already on their way to stop him. The army of justice is already on the run, so the legendary struggle starts. Join it and do everything to win! You will have to struggle with enemies one by one.