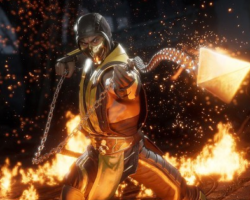 From 1992, Mortal Kombat is still the most appreciated and well-known fighting titles in the world. It has been incredibly popular for years and there is a solid reason for that: it really is awesome! The previous parts, including the 10th one, have received very positive feedback from the audience and critiques. If you take a look at the trailer of the 11th part, you can predict that this one is no way weaker and maybe even better than everything you have seen from this studio. First of all, one can fairly conclude that the degree of violence, pain and blood here is unbelievable. So if you have been thinking that previous parts are too bloody or something like that, just take a look at this one and you will change your mind really fast. The scenes promise to be prominent and breathtaking.

In addition, this part really supports the style and tone of the entire series, adding more aesthetic moves and brutality to the whole picture. The background music is also thrilling: have you ever dreamt of playing that kind of game listening to tough hip hop? Well, now you can have it. The graphics will surely make you astonished, since the artists worked scrupulously on every single detail and therefore close-ups that regularly happen during a fight look as if they were scenes in a real life.