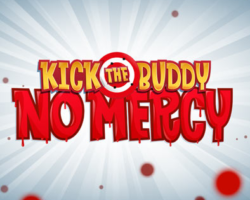 Is there any better remedy from stress than silly violent games? Guess, not! Here is a real masterpiece of the genre – Kick the Buddy: Forever. Have no mercy to this buddy and relieve yourself from all the negative emotions you accrued during a day. Your girlfriend and mom will be thankful. Open the game right now and see how many tools and weapons you have to make Buddy’s day really painful. By the way, once you enter the game, don’t be surprised – it doesn’t have a menu. You will appear in a locked room, where Buddy is waiting for his tortures and maybe death, if he is not so lucky today. Hard times are about to come and Buddy knows it, so he accepts kicks, explosions, and other ways of destruction as if he was a true stoic. The whole story of the game is just destruction in many, many ways. Buddy can die, but it is just for a while – he will be back in a couple of seconds, ready for a new portion of beatings. Does it have any sense? Of course, not! Just damage the doll, receive scores, and get bonus weapons to damage it even harder. Sometimes, you will get additional tasks and get awards for successful completion. They are similar to everything you were doing before, however, they make a gameplay a little bit more variable.