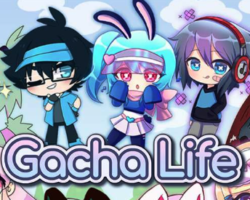 Girls are fond of dressing themselves as well as beautiful dolls! While in the ancient times we had physical dolls – some were plastic, the others were made of paper – today we have it all digitalized. No need for nostalgic feelings and light sense of sadness for the old days that have passed – enjoy the progress and try a digitalized dress-up title called Gacha Life. Indeed, what really makes dress up titles amazing is that a wide range of clothing options is in your hands. When it comes to Gacha, the number of options grows for a couple of times. Indeed, there is no wonder that this title has become one of the most popular of a kind and stroke the charts. First of all, it can boast of having incredibly nice graphics – the characters are invented from scratch and all of them look very appealing, since they are unique. The way they look reflects their personalities and this is a great material for you to play with when choosing an image for them. Second, the game is not limited to a wardrobe and a pack of dresses. There is also an opportunity to play for a created hero, passing a story of a visual novel. Whether you decide to choose the one developers have already done or rely on your own imagination – you can do both. And this is not all. The story-mode is not just a novel, where you have to watch your static character saying something to another character. Yes, you will do that, but in addition you can also display some reactions, mimics, and moves, which has never been seen on visual novels before. What is more, to make sure that you are not bored during the process, the developers have implemented a number of small games that will bring you scores and move you up in a chart, so you can also compete with others while having great fun.