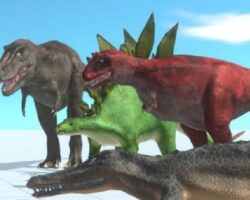 Crush the animals and become the most fierce armies leader. You have to choose the maps and fight areas, plan the invasions and repel attacks of the enemies. If you don’t want to take part in the fights yourself, use the maps for ruling your forces in Animal Revolt Battle Simulator. The game starts with the troops forming from the numerous types of animals and monsters. The opponents will be angry and have only one idea in their minds: kill you and your troops. Choose from the wide list of animals, your soldiers and powerful weapons!