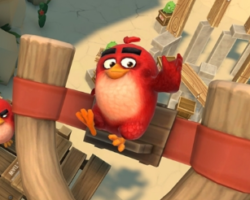 Augmented reality is making huge steps forward and more game developers pay significant interest to this modern technology. Indeed, this is a truly incredible playing experience, when gamers literally witness a mixture of two world overlapping on one another. Still, it is not a virtual reality, so these titles don’t transfer you in a completely other universe, however, they to transfer characters and objects to your own world. Meeting a pokemon in your own room? No problem! Seeing a fantastic creature in a supermarket? Now this is possible! So the most popular titles implement AR technologies to their products in order to give a fresh touch to the games we all know. The same has already happened to one of the most popular franchises in the world – Angry Birds. Now familiar characters can leave the screens and play with you in the real world. Sounds great, isn’t it?

So the new AR version of Angry Birds mixes two universes – the one we live in and the digital one. To launch Angry Birds AR: Isle of Pigs, you need to find a flat surface. Both small and large ones will do. For example, you can use the wall or a table as well as any flat surface you can find on the street. Just make sure that it is convenient enough. You will have to fight with pigs just like you always did in the titles of the series. This time, the shelters which pigs use to hide are three-dimensional, so your positions can change in any way. You can attack the enemies from all imaginable angle, which will definitely make your strikes more effective and the process – more thrilling and interesting. This is the main difference between this part and all the previous ones, while in general you will have to do the same things. The more pigs and their shelters you destroy, the better. Use a large slingshot to shoot the birds, aim accurately and show them, who is the boss here. Successful shots will give you bonus points, so do your best.