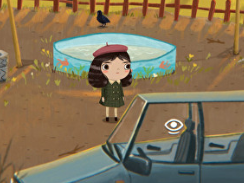 Kids live in the world of fantasies and sometimes these fantasies are mixed with the reality. What happens then? You will find out from the game called Little Misfortune. This is a next title launched by the same studio that has created Fran Bow, a well-known story of another small girl that balances between the reality and her inner world. Less gloomy and more playful, Little Misfortune still shares the same universe as the first title done by these developers. So this might be your chance to learn more about the previous story! The character of this title has to go to the woods as well. She is going to find magical artifact and Mr. Voice (her new friend, imaginable or not) is going to show her the way.

The game process is very lively, because you will have to interact with the outside world all the time and all of your actions will find their response there. So when you misbehave, the world reacts accordingly. Well, it doesn’t mean that you must not do that! In fact, the game encourages you to commit small nasty deeds. Remember that all of your decisions have impact on the story, so don’t overdo with little mean actions. The main idea of the game is that such thing as a correct decision doesn’t exist in our world.