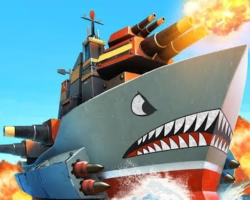 This title is a strategy for a large amount of players. The location is the alternative universe, which is similar to ours. The Second World War is unwrapping itself there and you will become a peace-maker, who needs to do everything to stop the war. The enemies are developing an evil plan called The Medusa’s Decision and you need to break their awful plans or the world will die in fire. You will unite with other players and cooperate or defeat them as the potential enemies. The time has come to change the history and save the world!