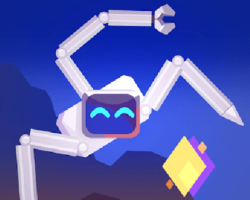 In the future, people grew tired of boxing and karate. Instead, they opened huge arenas where everyone who wishes to watch a thrilling show can observe robot fights. Your goal is to build your own battle droid from scratch collecting various spare parts and connecting them into a functioning mechanism. You can update your creation with more advanced details after participating in heated combats. Each of the robots comes with its own unique abilities that can be used to advantage on the battlegrounds. Get to the top of the rating in Robotics!