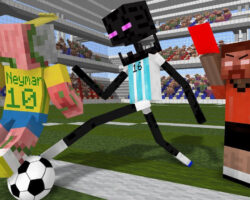 Welcome to the school where the monsters study! They love the same things that we and play the same games. Their favourite game is football. Take a part in the championship and win the prize! First, create you character and give it any appearance. Then start a game. It looks like the ordinary football championship but with monsters instead of players. Each monster has its own animation and behaviour what makes each game unrepeatable. The team that has the most coins, wins a game.