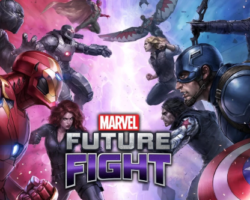 If you are thrilled with Marvel, this amazing game is just for you! Recruit a winning team choosing from over a hundred characters from X-Men, The Avengers and other super heroes from your favorite movies and set off to save the world! Accomplish missions, upgrade your characters and equip them with powerful gear to increase your chances against other players. You’ll find out how it feels to fly over city roofs in Spider Man’s suit or crash your enemies with Captain America’s shield. Completing your team with characters from the same series will give you even more bonuses and special effects. The game also features PvP arena where players can set their teams up against each other and find out who is stronger. Dive into the world of Marvel adventures and lead your heroes into the battle!