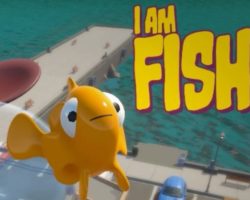 The simulating game go really far these days. You used to be a goat, remember? You have also been a goose. The world of animals seems to be extremely attractive for the game developers, so they don’t stop gladdening us with new masterpieces that allow us to feel ourselves in the shoes (or, maybe, not shoes, since animals don’t wear any, but in the bodies) of various creatures and beasts. Now we present a title called I Am Fish and you have already guessed what does it mean – you are going to become a gold fish and outlive a life of a marine creature. The problem and the main concept of the game at the same time is that fish were born to live in the sea, but people place them into the glass. Aquariums are pretty inhumane if you will think about them for a while. Of course, the gold fish is not developer enough to have an advanced brain and understand at least something. Some people say that their memory is no longer than three seconds. At the same time, living in a space limited as much as an aquarium is even a bit tragic, don’t you agree?
Well, the adventures of the game character of this sim title are pretty exciting. The aquarium is round, so it can roll like a ball. There is water inside and you, a fish, can make the glass roll wherever you need. Of course, you are heading to the sea or ocean, so you’d better try to keep the glass safe and the water at place until you find the sea and set yourself free. Try not to break it, which won’t be simple – you will have to jump really high and not all of your landings will be soft enough. Yes, this game is something like a city parkour performed by a fish inside of the aquarium. Have you ever played anything like this before? Guess, not! So try now and see!