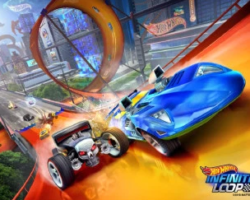 Years ago, Hot Wheels has become the most popular and incredible racing game. What is really surprising, this game remains the most widely-accepted and frequently played title of the genre. Now you have a chance to try out the new version of the game, the one where you will have a really incredible experience, different from all the previous parts you have tried. This time, the track in front of your eyes is going to be endless! The name of the game speaks for itself – The Infinite Loop is your new riding attraction and a super-extreme road to test.

So this time, you will compete with other players for the first place on the board. Your task is to become a champion of the track and get to the finish as fast as possible, moving forward and leaving all of your competitors behind. Be aware – this is not going to be a walk in the park. This is Hot Wheels, an extreme riding game, where players do everything to win! You will have to literally fight with other cars, pushing them, riding on their surface with your wheels, and crushing them into pieces. In the tough competition, every method that can lead you to the victory is great, so don’t be shy to act like a real tough guy.

There are a lot of car models in the game. Some of them are available from the very start, so you can choose the one that you like. You must know some of them from the previous games of the series, but you will also get an access to the new types of vehicles. With time, your successful rides will bring you an opportunity to open new cars – the models you have never seen before! Unblock cars, skins, and other customizable features that will make you look great on the track. What is more, cool advanced cars will be more powerful than the default ones, so your chances to win the championship will grow with an auto park composed of powerful machines!