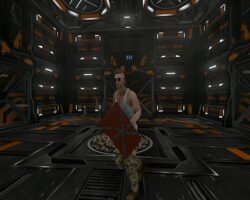 It is the fighting game where you are the most bloodthirsty criminals in the galaxy. You were prisoned because of the huge number of victims. Death had to come to you but here is luck. You get the second chance from the galactic corrupt system. Due to the extraordinary galactic survival games among assassins you can stay alive. You will fight in the large areas with rooms full of special traps. The mission looks impossible but not for you. Show everybody the skills of the best killer in the HALF DEAD 2.

Baldi’s Basics In Education and Learning