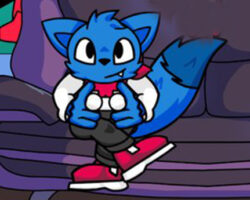 In the release named FNF: Friday Night Gaming vs Loki, the Boyfriend and Girlfriend come to their blue cat friend Loki who also happens to be a nerdy gamer. You decide to distract him from gaming and instead have a rap battle with you. Fortunately, the guy loves to sing and dancing too so he doesn’t mind. He even has three new songs for you to try out! You can even get this mod with you wherever you go because it can be played on touchscreens, i.e., your smartphone or tablet.

Dating Night Funkin’ But Everyone Sings It (Heartbass & Lover)