Eddie And The Misfits 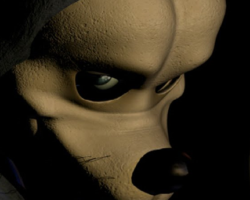 Eddie, who is the Black Bear plays with you in this game of the best Five Nights at Freddy’s fan-games. You will know the terrifying secrets of the main antagonist of the horror game. The action takes place in the abandoned theater. Eddi’s purpose is to destroy the system, while you have to guard Parts and Service room from him. During the nights you need to solve the puzzles, keep Eddi away and detect his locations all the way. To defend yourself use the button on the right which turns on the lights and it will kick him away.