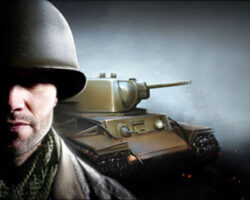 The World War is here. You will become a soldier and fight in the battles among the other participants. Break the army of your rivals, fight in the tank battles in the center of Berlin and other cities of the world. Take part in the team battles, locate bombs to kill your enemies, and defend it. You don’t have the right for a mistake – wrong moves can cost your life, so be careful and thoughtful. Everything is at stake! The game features seven legendary places of the Second World War, different war machines (USSR, Japan, Germany, USA), and 57 types of weapons!