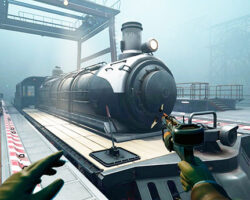 This game is devoted to survival of characters. They are forced to navigate a large, fantasy space and avoid dangers using various interdimensional vehicles. You will be collecting resources, crafting items and battling enemies One of the main tasks is to build your own train to travel through a mysterious world called Void. The game has just been released and the developers continue their work on the project. But you can be among the first players who will participate in adventures.