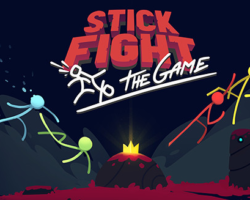 Stick Fight: The Game is a thrilling multiplayer action game that you can play online where iconic computer characters called Stickmen act as main heroes. Your goal is to select a hero and take part in a thrilling 4 vs. 4 combat against real players. Pick your moves wisely and improve your reflexes for your team to win. There are over a hundred unique locations that won’t let you get bored. The physical model is rather unusual which adds dynamics to the gameplay. Join the massive Stickman fight online and see if you can defeat everyone else on the battlefield!