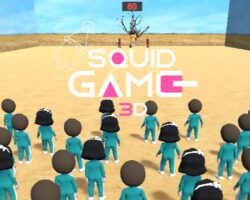 It’s no secret that many video games are based on films and one or other characters take part in them. Squid Game is no exception to this rule, and this cult Korean TV series, which is presented as a drama with violence, blood, and murder, inspired the developers to create the game. Accordingly, this game should be viewed as a classic horror game. But why classic? It would be more accurate to say one of the most bloodthirsty and terrible of its kind. Yes, fans of this genre will absolutely love this app.
At the same time, the game is not recommended for children, as there is too much violence and bloody scenes in it. And this is despite the fact that in the story the players will have to compete in child’s plays, which are very popular in Korea and have been played by more than one generation. Just imagine what kind of twisted plot awaits you here and how interesting it will be to play Squid Game. Moreover, for everyone’s pleasure, this application is developed in versions designed for PC and mobile devices. Accordingly, this game, which you will definitely like, will always be at hand, and you can experience the most indescribable emotions at any time.
The game has several levels. Or rather, a variety of children’s games in which you have to win. At the same time, this is a game of survival, and there are no second or third places here. Therefore, you must do everything to survive, or rather to pass the level according to the rules of the game, which are announced at the beginning of each round. Therefore, be extremely careful. After all, there is no room for error, which will be costly. So, gather your will into a fist and show your reaction, speed, strength, endurance, and ingenuity to the maximum. Moreover, the game is worth the candle! If you become the winner in Squid Game, you can win the main prize, which is not at all funny and amounts to more than $350 million in the equivalent of the South Korean currency. Now, can you imagine what incentive is there to win all the rounds and become the winner?