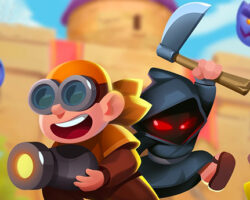 Wanna feel the thrill of a battle? Then welcome to Rush Royale! Initially, there are only two game modes available to us, PVP and Co-Op. The essence of the PVP game is that you and the enemy have paths of the same length in the form of an extended letter “P” – the path to your fortress, along which monsters will move during the game. The principle is similar to the tower defense genre. The opponent is chosen absolutely randomly among the people who pressed the search button together with you. There are also no bots, so you can count on fair play.

The main task in the cooperative mode is to guard the entrance to the fortress together with an ally, while there will be one entrance, and the paths for each player, in the shape of the letter G. To win, you need to act in accordance with each other, so teamwork skills are required. PVP and co-op modes differ not only in the form of the gameplay, but also in the rewards. For PVP, you mainly earn cups (35 on average), and for a cooperative, coins (from 1 to infinity, 500 on average, depending on how many rounds you survive).

At the very beginning of the round, you will be shown what the boss will be (and you can plan further actions according to this information). However, it only concerns PVP, and in co-op, bosses appear based on the difficulty level. You play by landing units on the field while accumulating mana for killing monsters. To raise the level of a unit, it is enough to connect it with another of the same level. Everything is very simple, you just have to observe rubbing your palms and poke the buttons in time. This is going to be a spectacular show! Are you ready to begin? The plunge into the thrilling vortex of war and see if you can get through another wave of monster attacks without losing too many of your soldiers!

House on the Hill