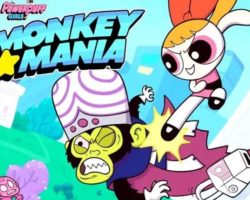 Mojo Jojo seemed to be defeated, but he was just waiting for a moment to strike back! During the award of the Powerpuff Girls, he took out a huge vacuum cleaner and sucked in almost all the characters. From them, he extracted a mysterious matter that can be used to create a giant army of evil monkeys to terrorize the city. There are only three heroines left and they should put up a fight! Use your super powers to oppose Mojo Jojo once again, fly up into the sky and free your friends to avoid the disaster!