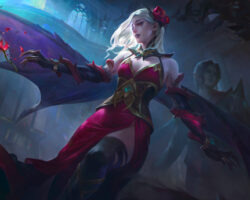 Take part in a thrilling team battle playing Mobile Legends: Bang Bang! The aim of this game is to get to the enemy base and destroy it while defending your own camp. There are two opposing teams fighting against each other. Each of the five players controls a hero of their choice. There are many characters you can select, including tanks, mages, shooters, healers and others, divided by type or role. You can click on the hero screen to learn about the specs and get an idea of what this particular character is capable of. Enjoy the gameplay!

There Is No Game : Wrong Dimension