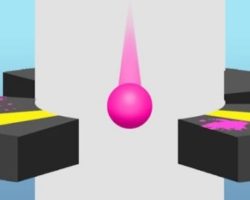 Sometimes a game doesn’t have to be overcomplicated to be gripping. And Helix Jump is just the example. This is a great game with an awesome set of perks that’s worth playing. The project looks very interesting, it offers a rather attractive image. Despite it’s straightforward concept, it can cause tremendous addiction forcing players to spend hours trying to guide a merry bouncing ball out of the spiraling tower.

This tower is a maze of spirals that you need to hop along making your way to the top. When landing on a platform, the ball leaves a trace of paint, but don’t worry, you can touch your own paint as much as you want, it won’t do anything to you. It’s just one of the visual effects the game is so rich in. Then our character needs to jump into the space between the platforms. To do that, you need to spin them around their axis so that the balls slips in between them. It won’t break even if you’ll fly about a dozen of platforms at once. On the contrary, you’ll gain lavish bonuses for a stunt like that, so it is even advisable to try and do so. The difficulty will grow with each level. Some parts of the platforms will be off limits for landing. Doing everything right will require good reflexes and understanding of the virtual environment. Train your visual perception and finger speed and rise as high as you can gaining points and setting new records!