FNF VS Whitty Corruption the Chase 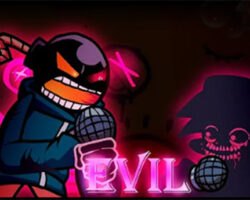 A new mod brings in a new story. Here you again meet Whitty. You must have already played against this angry FNF character. But things got worse, and Whitty body had been attacked by the corruption virus. Now this man became purely insane, the worst version of himself. And only the boyfriend can sort everything out and return him to his previous state. As always, there is only one solution to it – the main character has to win a musical battle against evil Whitty to realize his plan. Help him in this task.