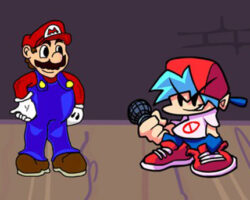 Mario character often appears in the Friday Night Funkin mods. And here we meet him again. Now he confronts the boyfriend in FNF vs Mario Expurgation. Expurgation is a new song that he and Yoshi are about to sing. The boyfried mission remains the same – he has to do his best to defeat this version of Mario whose eyes are red and look like they are about to go crazy. Just be attentive to press the right notes to ideally match the song rhythm. It is a try way to get a victory over your opponent.

FNF Vs Minus Sarvente (Mid-Fight Masses)