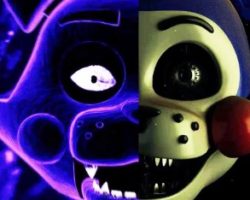 Animatronics have conquered the hearts of millions horror-fans. Gladly, among these fans, there pretty talented game developers! One of them has created Five Nights at Candy’s, a story that looks pretty much the same as Freddy’s one, but still a brand new and different. Here you will a bunch of new animatronics and the main is Candy, a cat-animatronic who owns a beautiful restaurant where the families have great time with their kids, eating burgers, and playing games. Just like Freddy, she has a large team of mechanical animals that create an enjoyable atmosphere in her restaurant. They play with kids, sing songs, and entertain them in all ways. However, they are as crazy that those who work with Freddy.
The first part of the story is shaped as the main line of FNAF – there is a need to sit inside of the restaurant at night and keep things in order. Only now the character of the game is a young woman. Her name is Marry and she is here to get some money. Of course, she doesn’t know that a large sum Candy offered is for a reason. She is going to spend the creepiest five nights in her entire life. Join Marry and help her track the rooms and corridors to see when the monsters are approaching to her room.