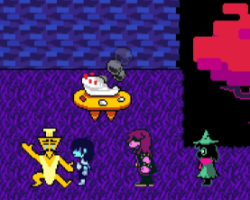 Not long ago, a well-known Fox, an author of the game called Undertale, have made a Twitter-post, where some strange links were located. These links lead to a creepy-looking site filled with fake malware alerts. There you can get yourself a brand new game from Fox – Deltarune. This one is considered as a small demo-version of the up-coming full title and we hope that the creator will be able to finish his work and please the community of gamers with an awesome indie-piece, which promises to be even more thrilling than a previous one. Automatically Deltarune is perceived as the continuation of Undertale, however, there are some doubts about such a conclusion. Actually, it doesn’t seem to provide any sequel but you are expected to play Undertale before you start Deltarune because it brings important details to the overall game structuring. In a new part you will see a range of original characters, improved and expended battle modes, which change and become even more interesting when you pass the levels, and a high level of strangeness adored by all indie-game fans. Maybe, one of the best things about Deltarune is the way it balances between determinancyand the freedom of action. There is a plenty of both there and you will have to experience moments when you feel yourself as an actor of free will in the open and unpredictable universe and somebody who cannot take control of what is happening. As for the battles, they are pretty similar to those you already know from Undertale: you will avoid enemies’ strikes and try to kick them in turn. At the same time, there are some significant improvements and new combat-moves/techniques for you to master and discover. To avoid any further spoilers, we encourage you to download Deltarune as fast as you can and get the most of it. Good luck.