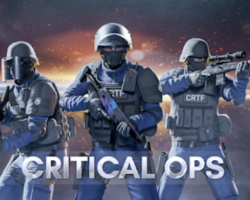 Get ready for a battle! Call your friends (up to six people can play this game at the same time), divide into two teams and see, which team will defeat another one. The roles of your teams are the opposite. One of them is a group of terrorists, the other one is a group of soldiers that try to neutralize and defeat the terrorists. Play for one of the teams and enjoy! You will have to shoot at your opponents and try to kill them all. The team that kills all the member of an opposing one wins the battle.

Fireboy and Water Girl for Two