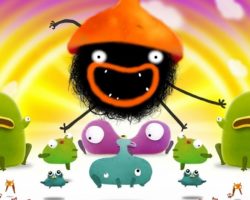 Chuchel is the main character of the same-name game. He looks like a ball of yarn in a mushroom-like hat and his charming smile will steal a way into your heart. The idea is to help him find and get a cherry that was once nipped by a giant. Chuchel has a comrade, enemy, and pet named Kekel. Try to guess whether he is trying to help you or to mingle all around during your fascinating adventure. The game has multiple episodes but you shouldn’t try grasping the linkage or any kind of sense. These are pretty random scenes of Chuchel and Kekel trying to get the cherry back. When you reach the last level, it becomes clear that the giant’s hand with a berry was just a larger version of Chuchel (or the creature of the same specie). You and Kekel get eaten by this monster and find the cherry in his belly. They are smart enough to move right to his brain and switch his condition from “angry” to “happy”. Now the monster is kind and ready to make friends, bring you back home, and eat a berry together. However, the idyllic picture won’t last for too long – there is another monster out there and he’s got a pear! There are thirty different levels in this title. You will control Chuchel mostly by point-and-click. Also, there are mini games similar to Pacman, Tetris, and even the offline game about a dinosaur from the Chrome browser. You will control Chuchel to get a berry and then another Chuchel will steal it again, so the story seems to be never-ending.

Ori and the Blind Forest