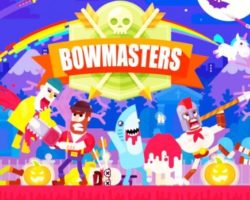 The time has come for a thrilling competition between the best bow masters in the world! Ready to join a multiplayer version of this cool game? Now you will meet the other fans of the game and have a chance to arrange a competition. There are more than sixty crazy heroes to choose from, including Batman, Shark, Robin Hood, Cat Girl, Alien, and even Rick! You will arrange duels between two players or massive fights on the large field where numerous other bowers shoot birds, apples, aims, and each other!

Slice Them All! 3D