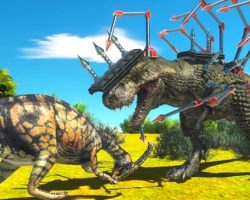 Can you imagine a fight between a mammoth and a T-Rex? How about a giant spider against a dragon? Or even King Kong versus Godzilla? It’s possible in Animal Revolt Battle Simulator 2 where you can stage the most incredible clashes of species, and not only in 1v1 mode, but a full-scope battle between two or more armies! Amazing graphics, realistic damage system and plenty of thrilling emotions are guaranteed to anyone who decides to try this game online!

The Binding Of Isaac: Rebirth